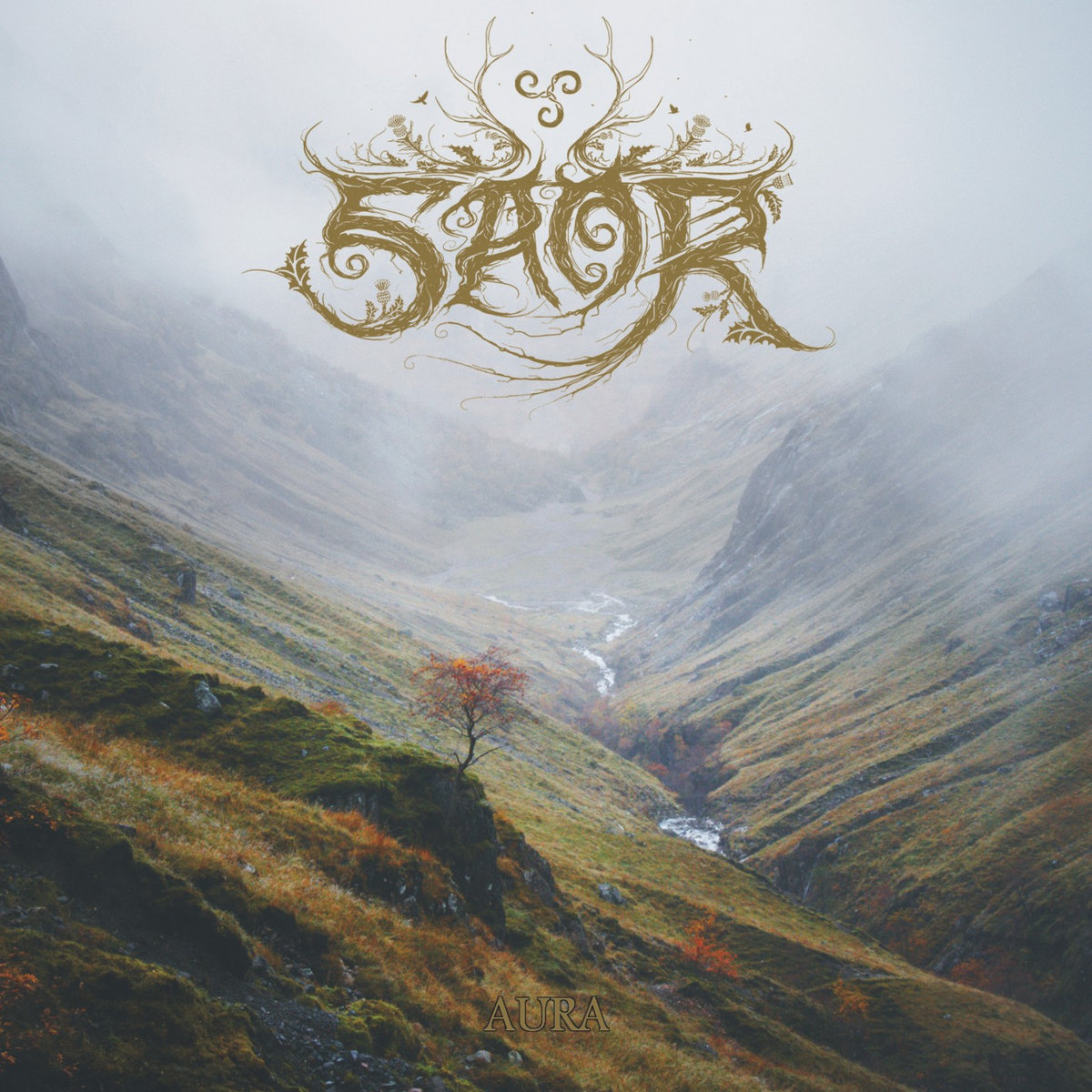 Saor (formerly Arsaidh) may not be a household name in black metal, but this album might just change that. Featuring breathtaking atmospherics, soaring folk melodies, and unearthly roars from the vocalist, this is a epic album in every sense of the word. The band being from Scotland, it's easy to see why they chose to make an album like this since it evokes the incredible beauty of that land so well. One can easily imagine standing on a mountain in the Highlands peering over the fog and just being in awe of your surroundings. The album can demonstrate immense power one moment and emotional fragility the very next. It's those kinds of powerful emotions and imagery that are the album's appeal to me and doubtless many other fans. Every one of the five tracks flows extremely well and tells its own story making for a highly cohesive album. And what's truly unique about this album is that despite its beauty and grandeur, it's still sounds raw and intense with the with the frenetic, intense drumming being a particular highlight for me. Where this album suffers though is mainly on the production. Admittedly, I really don't know anything about production from a technical aspect but from an aesthetic aspect, it somehow feels awkward on this album. Perhaps if it were a bit more polished like on the last Summoning record it would have been even stronger. Another, more minor beef I have is that there are a few too many similarities between the songs. An acoustic interlude or two might have been nice too. Despite those issues, this is an amazing record that, like last year's new Summoning and the Caladan Brood debut album, will probably go down as one of black metal's most unique and awe-inspiring.
9/10

(Special thanks to Northern Silence Productions for a sending me a promo copy.) Since Anathema's return to the music world with 2010's "We're Here Because We're Here" and 2012's stunning "Weather Systems," the band have carved out a well-defined sound that, while similar to that of their older albums, marks a distinct chapter in the band's history. On "Distant Satellites" this sound has been altered slightly to evoke a darker, more brooding mood but the changes are certainly less subtle than one would expect simply based on the beautifully dark album cover. Things are a bit more stripped down on this album with an emphasis on simplicity, catchiness, and directness. This is most apparent on songs like "The Lost Song Pt. 1" and "The Lost Song Pt. 3," both of which are structurally straightforward with a constantly repeating drum beat and crescendo at the end. Yet even though this album is more minimalistic than the band's past releases there's still a whole lot of variety, perhaps more so than in the past. Take the difference between "You're Not Alone," for example, with its repetitive, almost garage rock sound and the ethereal, Radiohead-esque "Take Shelter." Here we see a band that's a little less restrained than before in terms of reaching into other genres while still retaining their trademark sound. While others may disagree, to me the way the album transitions into electronic territory on the last three songs is a brilliant move. One could think of the first portion of the album as signifying one's relations with people whereas the last part of the album takes a more introspective turn and examines our own consciousness and psyche. In any case though, the last three songs certainly give the album breathing space and allow it to end gracefully. If I had to pick some highlights from "Distant Satellites," mine would be "The Lost Song Pt. 2" and "Ariel." These two tracks are to me some of Anathema's greatest artistic achievements even if they sound like they could easily been on the previous two albums. In all, this is an album that's focused on trimming whatever fat was present on "Weather Systems" and further perfecting the band's atmospheric sound. The lyrics may be pretty cheesy but that's they've almost always been for Anathema and since they're coming from a genuine place it's hard to fault the band for that. I'll close by saying that "Distant Satellites" is another fantastic release from one of my favorite bands and it can stand tall in Anathema's discography.
9.5/10

(Special thanks to Kscope for the promo copy.) After the bombastic, poppy heaviness of Epicloud, the ever-eccentric Hevy Devy decided to pull another 180 and deliver something quiet, emotional, and entirely heartfelt. Casualties of Cool is in many ways the spiritual successor to the awe-inspiring Ghost, albeit with an interesting twist. Devy has experimented with a wide range of genres throughout his career, but his love of country was something previously unknown to many fans and hardly anyone expected him to incorporate it so extensively as he does here. Yet in true Devy style he amalgamates the soulfulness of Johnny Cash-type country music with spacey ambient explorations similar to those found on Ghost. To top it off he brought in Che Dorval (previously the backup vocalist on the Ki album) and she does an absolutely stellar job throughout. Her vocals are at once engaging, as if she's beckoning the listener to embark on a journey into the depths of the human soul, and distant, as if struggling to come to terms with the human condition and therefore ambiguous. While Anneke von Giersbergen, Devin's more well-known female collaborator, has helped contribute to some of his most legendary songs, I think that her more pop-oriented vocals would not have fit the introspective tone of this album as compared with Che's soulful, emotionally fragile singing. Song-wise Casualties has some truly sublime tunes like the Pink Floyd-ish "Moon" which is essentially a gradual build-up into aural bliss with a soaring saxophone complemented by Che's wordless vocalizing (a la "Great Gig in the Sky") and Devy's characteristic half-whispered crooning. Another highlight is the arresting "Flight" where Che is absolutely hypnotizing. "Mountaintop" takes things into a more upbeat, catchy area with an excellent video to accompany it. Finally, there's the sublime ballad "Bones" where Che once again shines like a star. Production-wise, this album features the same engrossing wall-of-sound we're used to and, as always, it makes the music stand out all the more Casualties of Cool is a beautiful, engrossing journey but it's not without its speed-bumps. . Some of the interludes like "Hejda" and "Pier" feel out of place and detract from the album's cohesiveness. Then there are other songs like "The Code" and "Deathscope" which are merely good but pale in comparison with the highlights. So while Che may have given Devy some of his best songs here, the album as a whole suffers a bit from inconsistency unlike the superb Ghost which I fully enjoyed all the way through. Nevertheless, Casualties is still an excellent achievement in Devy's storied career and something he should be very proud of.
9/10